Baltimore Bar Library presents Ernest Latham for a discussion of his new book, Targeted as a Spy 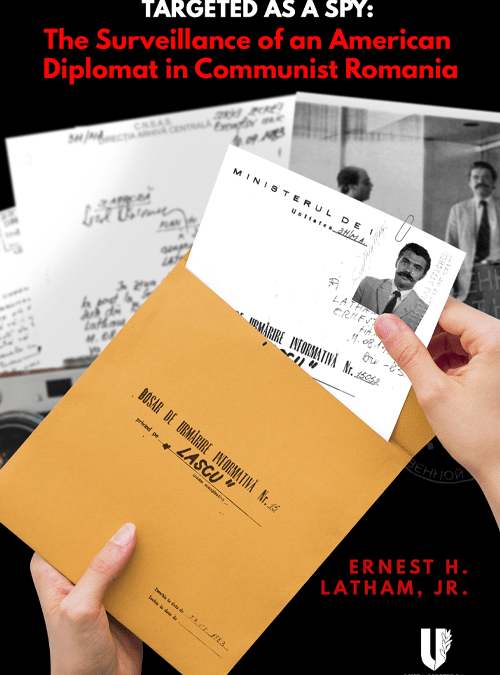 Join the virtual discussion of Ernest Latham’s book Targeted as a Spy: Surveillance of an American Diplomat in Communist Romania, hosted by the Baltimore Bar Library, on Tuesday, March 23.

Hear It From The Man Who Lived It!

On Tuesday, March 23, 2021, at 6:00 p.m. ET, Ernest H. Latham, Jr. will speak on his book Targeted as a Spy: Surveillance of an American Diplomat in Communist Romania. The lecture will be presented by way of Zoom. We invite those that will be watching to participate by contributing their questions. Zoom is an interactive platform.
An often overlooked aspect of the Cold War was the extent of diplomatic espionage that went on in the countries behind the Iron Curtain. Every Western Diplomat stationed in Soviet-bloc countries was targeted as a spy by the security apparatus in the respective countries. With the opening of archives in Eastern Europe, the extent of this diplomatic espionage can be revealed for the first time.
Ernest H. Latham, Jr. was a career foreign service officer who served the United States in various posts around the world. From 1983 to 1987, he served as cultural attaché at the American Embassy in Bucharest. During his time in Romania, Dr. Latham was targeted as a spy by the brutal Communist dictatorship of Nicolae Ceausescu and subjected to constant surveillance by the dreaded Securitate, Ceausescu’s secret police.
Dr. Latham’s book is a collection of the surveillance reports that he was able to obtain from the Romanian archives following the collapse of the Communist regime. They reveal the extent of the surveillance to which Western diplomats were subjected and, more importantly, they reveal a great deal about the system and society that produced these materials.
With an introduction by Ernest Latham, this book should be essential reading for students of the Cold War and for anyone interested in the mindset and functioning of totalitarian regimes.
If you would like to join us for what should be a fascinating evening, please e-mail me at jwbennett@barlib.org and I will forward the Zoom Link to you the week of the program. If technology is not your cup of tea, do not let that stop you. Zoom is incredibly easy to use and we will send you the very simple instructions to use Zoom should you need them. Stay safe and we hope to see you with us on March 23.
Time: 6:00 p.m. ET, Tuesday, March 23, 2021.