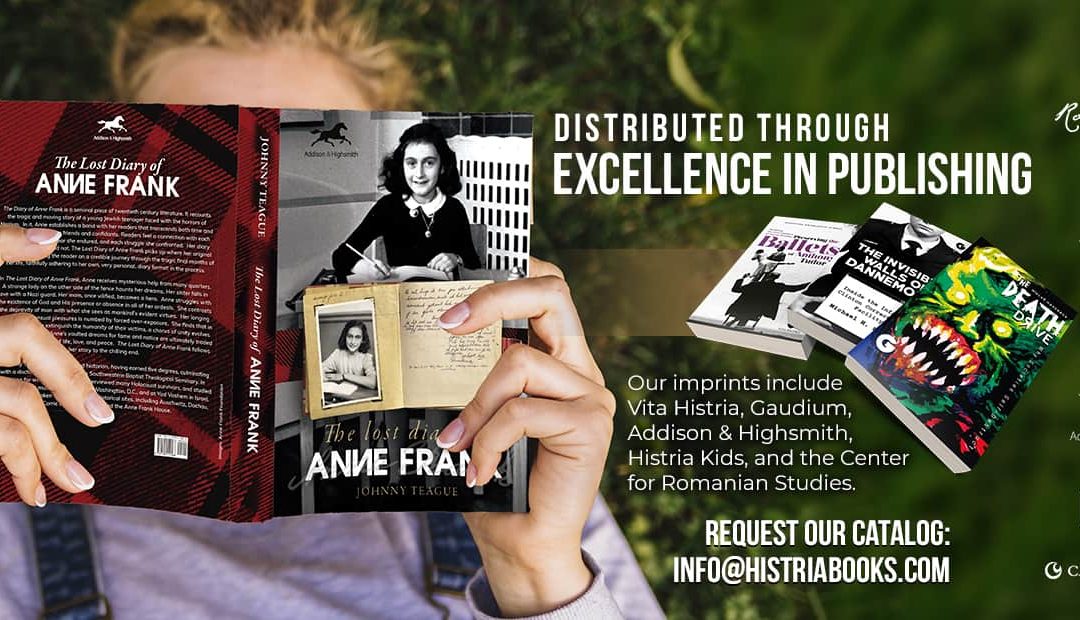 Histria Books is pleased to announce its official publication schedule for Spring 2021, covering the period from January 1 to June 30, 2021. The list includes a great selection of trade and academic titles, both fiction and non-fiction.

Revelations of Byzantium: The Monasteries and Painted Churches of Northern Moldavia
by Alan Ogden. Historical introduction by Kurt W. Treptow.

Synopsis: Revelations of Byzantium is a full-color album celebrating the world-renowned monasteries and painted churches of Northern Moldavia. Each church is presented in words and pictures to reveal its own unique history and artistic beauty. Also included is an introduction to the history of Moldavia and Romanian lands during the Middle Ages.

The Formation of the Albanian National Consciousness
by A.K. Brackob

Synopsis: As the Ottoman Empire collapsed, Albanians faced the peril of being absorbed into the surrounding nation-states of Southeastern Europe. Albanian leaders met to devise a strategy to defend their national rights. The Formation of the Albanian National Consciousness explores the origins of the movement that led to the creation of modern-day Albania.

Synopsis: Lucrezia Borgia is among the most fascinating and controversial personalities of the Renaissance. This biography by German historian Ferdinand Gregorovius goes beyond myth and romance that has obscured the fascinating story of Lucrezia Borgia. It is enhanced with an introduction by Samantha Morris, a noted expert on the history of the Borgias.

Synopsis: Chango (Csángó) refers to a population living in Romania whose ethnic origin has been the subject of controversy. Many are bilingual, speaking Romanian and Magyar, and their religion is Catholic. This book makes an important contribution to the discussion of the origin of the Changos and sheds new light on the history of this fascinating people.

Synopsis: Twelve-year-old Miriam discovers a tropical island where fairies tell her and other orphans that they have been granted yearly wishes, but the magic only works if the child is willing to work for the wish. Along the way, she learns lessons about hard work, friendship, trust, and loyalty.

Synopsis: Romanian historian Nicolae Iorga was one of the most important European cultural and political personalities of the first half of the twentieth century. The only English language biography considers of Iorga, it considers his career as a historian, politician, journalist, literary critic, playwright, writer, poet, linguist, orator, and teacher.

The Knights of the Golden Circle in Texas: How a Secret Society Shaped a State by Randolph W. Farmer.

Synopsis: The Knights of the Golden Circle in Texas is a study of the notorious group that encouraged the most disastrous war in American history. The KGC sought to create a new society separate from the United States dedicated to the preservation and expansion of slavery into Latin America. It played a significant role in bringing about the Civil War.

Percy St.-John and the Chronicle of Secrets by E.A. Allen.

Synopsis: An unbreakable cipher, a dead priest with expensive shoes, a hermit who converses with saints, an angry French girl, and much more might stop an ordinary fifteen-year-old safe-cracking genius, but not Percy St.-John.  He’s out to prove he did not steal a mysterious ancient book that may hold the key to mankind’s greatest hope and greatest danger.

Americans and Queen Marie of Romania: A Selection of Documents, Diana Fotescu, ed.

Synopsis: Americans and Queen Marie of Romania is a collection of documents that vividly illustrates the queen’s relationships with two remarkable Americans, George Huntington and Ray Baker Harris. It contains insightful material about royalty, politics, and life in inter-war Europe.

Synopsis: Molly – A Love Story is a true story about a cute little pit bull, lost and alone in the world until one day she was rescued and given a home. Molly’s story teaches children about the unconditional love that a dog can bring to a family. Dog lovers of all ages will be moved by the story of Molly and her adopted brother Logan, a Siberian husky.

Synopsis: All Rise!  The Libertarian Way with Judge Jim Gray provides us all with an inside look at Judge Gray’s ideological transformation, giving a clear overview of Libertarianism, the values it holds for America, and how it stands to unite us, which is precisely what we need in these divisive and frustrating times.

The Oar of Odysseus by Richard M. Bank.

Synopsis: As Penelope Bauer celebrates her acceptance into the Classics program at Boston University, she is unaware that fate has groomed her for a grand adventure, a wild ride of Homeric proportions. Like her ancient namesake, the wife of Odysseus, she will have to depend on the courage of a woman warrior to see her through the perils of her own Odyssey.

Vlad III Dracula: The Life and Times of the Historical Dracula by Kurt W. Treptow.

Synopsis: Vlad III Dracula, the authoritative biography of the historical Dracula, presents the life and times of this remarkable personality of medieval Europe. The author uses all extant Romanian, Turkish, Russian, and German sources to reconstruct the true history of this famous prince and to discuss the development of the Dracula myth.

Romanian/Limba Română: A Course in Modern Romanian by James Augerot.

The Crossing by Ashby Jones.

Synopsis: The Crossing is a powerful and haunting love story of surprising discovery set in Manhattan’s Hell’s Kitchen during Prohibition. Irish-born Johnny Flynn, a former British soldier, is banished from his homeland and sent to America. Hell’s Kitchen, Johnny discovers, is thronged with people whose damaged hearts ache for revenge, repentance, and love.

The Invisible Walls of Dannemora: Inside the Infamous Clinton Correctional Facility by Michael H. Blaine.

Synopsis: The insightful book reveals the inner workings of this massive prison where the famous prison break occurred in 2015. It is the first look inside at what it was like to work at the Clinton Correctional Facility, its effects on those who spent time there on both sides of the bars, revealing why nobody escapes The Invisible Walls of Dannemora.

Why Political Democracy Must Go: The Origins of Socialism in the United States by John Reed. Introduction by A.K. Brackob.

Synopsis: Why Political Democracy Must Go: The Origins of Socialism in the United States is an insightful analysis of the origins of the socialist movement in the United States, written by famed journalist John Reed. He exposes the myth of ‘democratic socialism’ by providing an overview of the development of socialist thought in America.

Synopsis: Brig Ellis is a private investigator hired to protect an artist who paints using cremated human remains. Many people less than thrilled by his art and some are determined to stop him one way or another. While Ellis tries to keep the artist safe, he wrestles with his own moral beliefs surrounding this fascinating but questionable form of Dying Art.

The Red Army in Romania by Constantin Hlihor and Ioan Scurtu.

Synopsis: The first comprehensive study of the Red Army’s occupation of Romanian territory in 1940-1941, and its occupation of the country at the end of World War II, which lasted until the withdrawal of Soviet troops from the country in 1958. The authors are two well-known specialists on twentieth-century Romanian history.

Fortresses of Faith: A Pictorial History of the Fortified Saxon Churches of Romania by Alan Ogden.

Synopsis: Fortresses of Faith celebrates the magnificent architectural legacy of the German fortress-churches or kirchenburgen of Transylvania or Seibenburgen. After a comprehensive introduction covering history, architecture, and decor, the author takes us on an enthralling photographic tour of these remarkable monuments.

Synopsis: Romanian Gymnastics was originally published on the occasion of the 1996 Olympic Games in Atlanta to celebrate Romania’s remarkable achievements in the sport. This 25th-anniversary softbound edition is issued to commemorate the Tokyo Olympic Games. The book profiles such stars of the sport as Lavinia Miloșovici, Simona Amânar, and Gina Gogean.

Histria Books is distributed worldwide by the Casemate Group. These Spring 2021 titles are available for preorder through all major book distributors and at Histria Books.com.