Targeted as a Spy: The Surveillance of an American Diplomat in Communist Romania now available from Histria Books 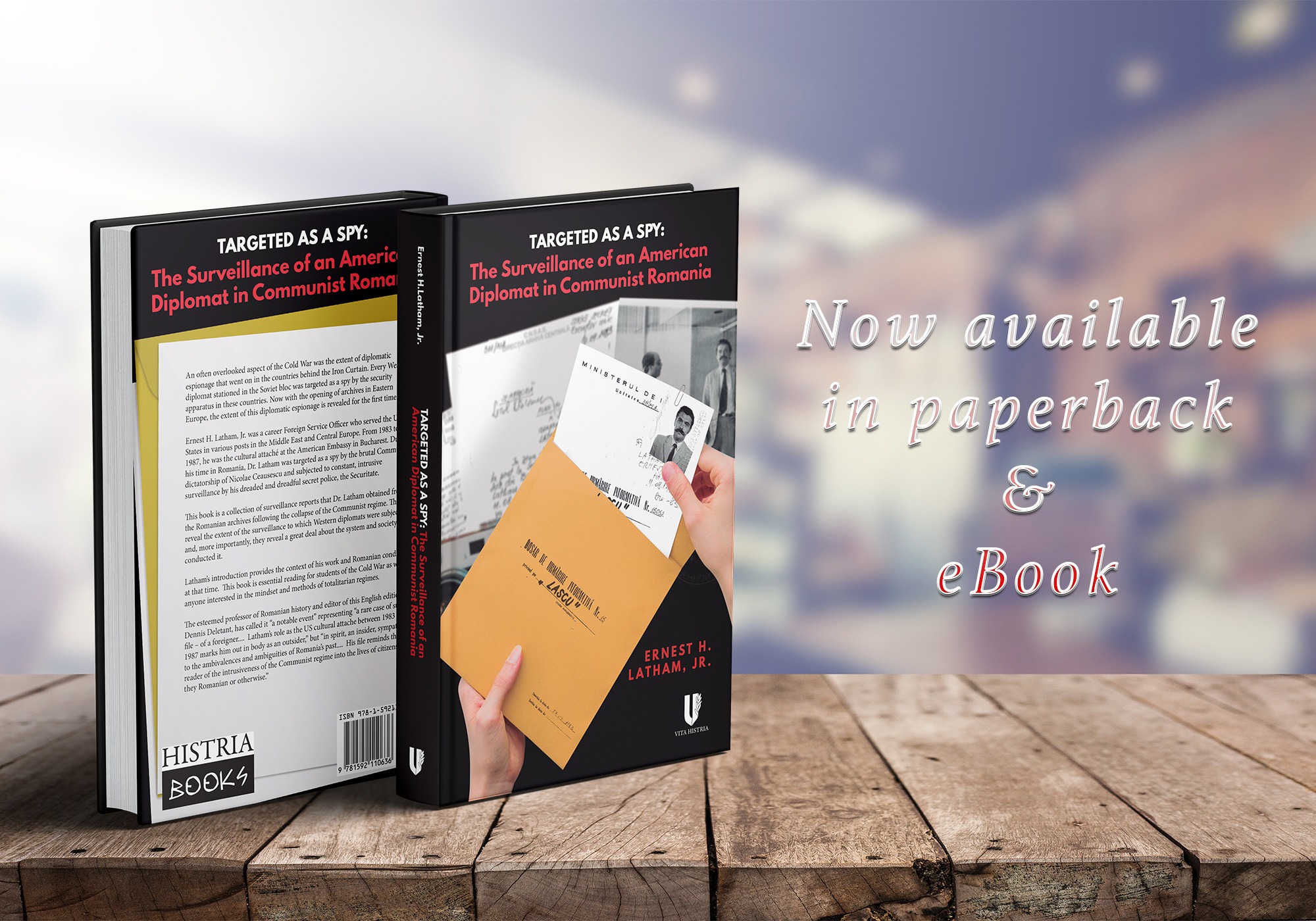 Histria Books is pleased to announce the release of Targeted as a Spy: The Surveillance of an American Diplomat in Communist Romania by Ernest H. Latham, Jr. The book is published by Vita Histria, an academic imprint of Histria Books dedicated to outstanding scholarly works in a variety of fields.

An often-overlooked aspect of the Cold War was the extent of diplomatic espionage that went on in the countries behind the Iron Curtain. Every Western diplomat stationed in the Soviet bloc was targeted as a spy by the security apparatus in these countries. Now with the opening of archives in Eastern Europe, the extent of this diplomatic espionage is revealed for the first time.

Ernest H. Latham, Jr. was a career Foreign Service Officer who served the United States in various posts in the Middle East and Central Europe. From 1983 to 1987, he was the cultural attaché at the American Embassy in Bucharest. During his time in Romania, Dr. Latham was targeted as a spy by the brutal Communist dictatorship of Nicolae Ceaușescu and subjected to constant, intrusive surveillance by his dreaded and dreadful secret police, the Securitate.

This book is a collection of surveillance reports that Dr. Latham obtained from the Romanian archives following the collapse of the Communist regime. They reveal the extent of the surveillance to which Western diplomats were subjected and, more importantly, they reveal a great deal about the system and society that conducted it.

Latham’s introduction provides the context of his work and Romanian conditions at that time.  This book is essential reading for students of the Cold War as well as anyone interested in the mindset and methods of totalitarian regimes.

The esteemed professor of Romanian history and editor of this English edition, Dennis Deletant, has called it “a notable event” representing “a rare case of such a file – of a foreigner….  Latham’s role as the US cultural attaché between 1983 and 1987 marks him out in body as an outsider,” but “in spirit, an insider, sympathetic to the ambivalences and ambiguities of Romania’s past….  His file reminds the reader of the intrusiveness of the Communist regime into the lives of citizens, be they Romanian or otherwise.”

Targeted as a Spy: The Surveillance of an American Diplomat in Communist Romania, 280 pp., Softbound, Illustrated, ISBN 978-1-59211-195-4, is available at HistriaBooks.com and from all major book retailers. The book is also available in hardcover and eBook formats. Titles published under the various imprints of Histria Books are distributed worldwide by the Independent Publishers Group (IPG). For information on publishing with Histria Books, please visit HistriaBooks.com or contact us at info@histriabooks.com.